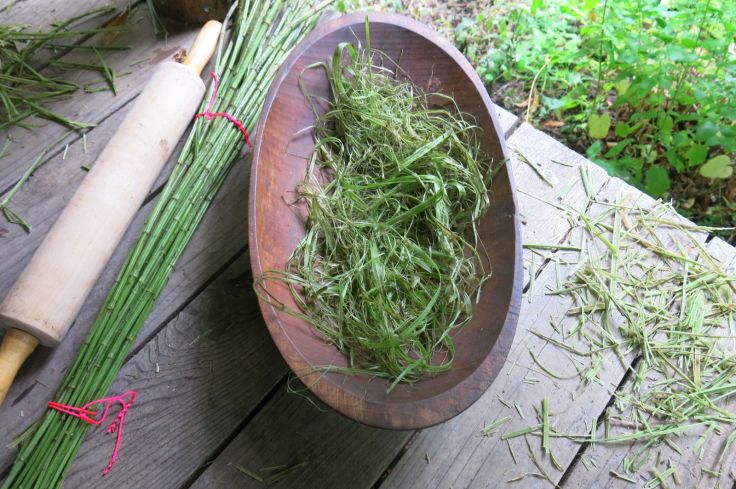 I’ve made soup with them, abused them with the weed-whacker, tiptoed through them in shorts, taught their anatomy to renewable materials students, photographed their male and female flowers, and watched their cycle of growth from the tender re-sprouts in the spring to the silvery senescence over winter.  But I’ve never made yarn from them, until this week. I’ve made about 7”!  It’s green, scratchy, and smells like the woods.  I think I can improve my technique and do better.

Nettle is a fiber that was used in Europe and here in the US by early settlers, and by Native Americans, as well.  It’s quite strong, as you know when you try to rip a nettle plant to pieces.  The fiber is a “bast” fiber, which means it’s part of the phloem, that relatively moist, sometimes almost gooey part of the plant just under the surface. If you nick the surface with your thumbnail you’ll be in the phloem. If you scrape, you’ll scrape the phloem off.  So how do you harvest the phloem?

We weren’t sure, even after some quick reads of articles and on the internet.  The basics are to slightly rot the stems after you strip their leaves (it’s called ‘retting’), then crack the stems, which are hollow, and break the wood out of the middle.  It takes time!  Our first 32 stems took us an hour or more for two of us.  The second part is to take those dried strips and shred them into what looks a bit like a lint ball. I have “cards,” that I’ve used on wool, to help do that. The third part is to take that lint ball and just start twisting and pulling.  My 7” stub is actually twice that length, but I made it into two-ply because the single plies were extremely weak in places—that is, they basically broke.