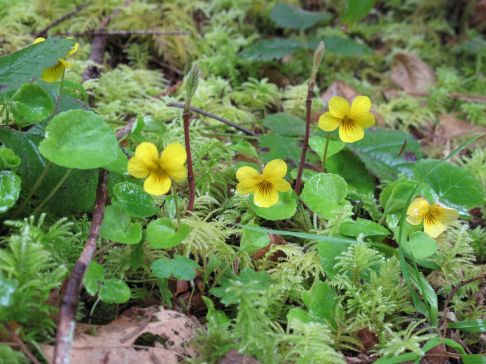 “Some of them like it; some of them don’t.”  That’s what a future landlord told me years ago on the phone while describing the firehouse he was renting.  (It turned out it was a farmhouse; I hadn’t understood his New Hampshire accent. And I liked it.)

We had a cold winter this year in the Oregon Coast Range and a lot of rain, over 100 inches, which is about double the norm. In the spring, everyone grumbled about the prodigious growth of the lawns and weeds, expounded about their vegetable gardens, and in the case of ten of my undergrads, cursed the groundwater recharge. They all planned to be wildland firefighters this summer, and wanted action. Their only hopes were that the weeds would dry and help the fires spread (and yes, we have a lot of acreage burning), and that the eclipse visitors would make stupid mistakes (and no, they were careful). Fires aside, I had a question about this year’s weather that I could address. What were the effects on blooming dates?

Why would it be advantageous for a plant to flower early or late?  If the plant has small stature, early might help it be accessed by pollinators and seed dispersers before the other plants cover it over. Or early might be necessary to get the flowering-and-seed-production done while there’s still moisture, because ironically, wet soils could have quicker dry-down from competitors. Late could allow a plant to accumulate more materials that go into seeds (carbohydrates, nutrients), which could increase the likelihood of being successful in reproduction.

Does evolution really work like that?  Maybe, maybe not. In some cases the flexibility in flowering date will simply go along with other flexibilities and constraints, in which case flowering date itself isn’t necessarily the adaptive feature. Many species flower after a threshold of “degree-days” (cumulative number of days above a minimum temperature), which reflects their need for a certain amount of metabolism (which is chemistry, and is temperature-dependent) before growth and flowering occur. In these plants, flowering happens according to a metabolic schedule, not the calendar schedule, and flowering is relatively “plastic.”  Other plants have ways to track daylength, especially plants farther from the equator where the period of daylight changes dramatically from the equinox to solstice to equinox to solstice (March 21, Sept. 21, June 21, Dec. 21).  These plants have evolved to flower at a time in the daylength cycle, so their flowering is relatively “fixed.”

For the past seven years, we’ve recorded the date of first flowering at our cabin. Our largest category is eudicots, which are plants like columbines, violets, blackberry vines, and hazel trees, not conifers or grass-like or lily-like plants. There were 173 eudicot species (that occurred naturally, we didn’t plant) that bloomed this year. The dates are a little waffly because we don’t always discover plants the day they bloom, but this record still gives an idea.

The cold, wet winter was associated with later blooming in many species. Latest bloom dates were recorded in 39% of the eudicot species, whereas earliest bloom dates were seen in only 5% of them.  A higher proportion of the native species had delayed blooming (45% of the 106 natives) than the exotic species (28% of the 67 exotics).

What do the results–later flowering this year, but less so in the exotics–mean?  Later bloom probably mostly reflects the cooler temperatures early on, rather than the extra water.  But there are four possible explanations for why a smaller proportion of the exotic (weedy) species bloomed late. 1) Weedy plants have a more conservative, tried-and-true strategy of blooming than the natives. This seems unlikely: a hallmark of successful weeds is plasticity in just about everything (think about dandelions—big, small, early, late), and in general, high seed production is a requirement.  2) Weeds had already displayed plasticity in flowering dates, more than the natives, so it would have been more unlikely an exotic would set a new record in 2017.  That’s something I can look at next time it’s dark and rainy.  3) Exotics are mostly little plants whereas natives aren’t, and the little plants are more conservative.  This possibility is also not likely because little weedy things should be less conservative, and a quick look didn’t show any difference in the proportion of natives and exotics that are annuals, biennials, or perennials. 4) Some of them like it, some of them don’t.

One thought on “Was Flowering Earlier or Later after the Cold, Wet Winter?”