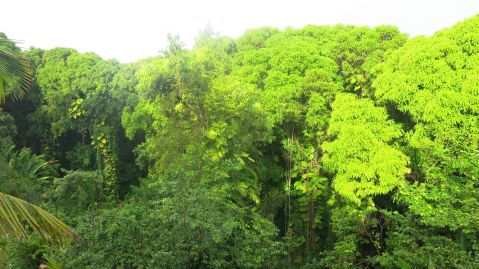 Out the plane window, Daria considered the resemblance of the wind-whipped ocean surface to a meadow in a breeze. In both cases, the waves and the troughs between them seemed tickled along by the wind. The mechanisms, however, were quite different, as she’d shown with a post-doc several years back. Just for starts, wind energy was translated to orbital motion in water but to vibrational energy in grass. Also, and obviously, water was isotropic whereas each individual grass was anisotropic and each culm had its own characteristics.

Her window went white with cloud: they were on the descent. Her presentation was all but complete. The laptop was put away, the backpack zipped closed at her feet, and her shoes were back on. She leaned into the seatback. “Eighth Plant Biomechanics Conference, Maui, here I come.”

Her talk was scheduled for the morning of the second day. She was a little peeved that she’d talk in a session on wind dispersal, even though her work was on her new model on sway in tree canopies. She showed why leaves show the most motion and dissipate the most energy, followed by branchlets, then branches, and so on.

The talk before Daria’s was a sensational presentation by the Japanese group. Attendees held their breath as the quiet men conferred with one another, held objects aloft, and fiddled with fans and baffles at the front of the lecture hall, until finally, they released a maple samara—the winged fruit–that hovered, mid-air. Attendees broke into raucous applause, and the presenters grinned and bowed. The Austrian and the principal from Aix-en-Provence followed the Japanese group out the door as Daria walked to the podium. And at her close, she only had one question by a colleague from San Diego, who used the entire three minutes for a mini-seminar of his own.

After lunch break, the Austrian was up. His title was “Fluted stems: a design for biomechanical advantage.” Fluted stems were tree stems that had ribs and grooves that could simply result from buttresses, but often were much more complex, with discontinuous enlargements and parts that had died.  True, the Austrian could model their efficiency at resisting bending—which, Daria had already done for a couple of cases, but the open question now was what mattered more, the biomechanics of these fluted stems or their other functions. Over the previous half-decade, Daria and her colleagues had demonstrated that fluted stems had advantages over typical cylindrical stems for drought resistance. She and her colleagues went further to suggest that it was drought adaptations that drove the evolution of the feature.

The Austrian took the podium, tall and self-assured. His words rolled out, lilting like the waves in the meadow. His animations were professional. But his huffing and cartooning did nothing to hide the fact that the Austrian had a hammer and everything looked like a nail. He didn’t mention her work, or even hint at it. You’d think he’d invented the subject, Daria scoffed, and that the only possible adaptive advantage of fluted stems was to hold the damn plant up.

She raised her hand. He fielded two questions but didn’t point to her. “What am I, invisible?” she thought, echoing the words her mother had said so many times when they sat at a restaurant waiting for service.

Daria would not be like her mother. She bee-lined toward the Austrian during the coffee break.

“Aloha-ha back,” she said, then started her question, but then Mexican liana specialist started in.

“Good enough, your presentation,” the Mexican said, “but you left out water transport.” The Mexican was transported in front of her in the choppy crowd, as each individual vied for a different conversant or tried to get to the fruit cups or coffee. She still faced the Austrian, but through the Mexican’s shoulder. She shook her head. She could model crowd movement, but knowing how it happened still wouldn’t help.

The next day was the excursion to a nature preserve. Daria entered the bus. She was already hot in her long pants and closed-toed shoes. She chose a seat on the right side by the window and forward of the floor hump. After she sat, she watched the remaining participants file in. Some brought enormous backpacks full of camera gear, no doubt; others brought wives. The Russian couple entered with pith helmets already on their heads. The skinny Belgian doing a post-doc in England wore sandals and a skirt—expressly against the organizers’ directions.

A young female crammed a pack into the rack above Daria, then flopped into the seat next to her. “I’m an undergrad. You look like you’ll be nice to me.” Her advisor at Pomona had sent her by herself. “Hey, look,” she then said, and pointed. “That guy who gave that amazing talk on bumpy stems.”

Two rows up the Austrian filled two seats. The Israeli in the seat in front of him was bellowing, and Daria heard, “Why’s no one worked on wind sway?” They discussed an approach, as best she could hear. They named a research station and a funding source. She visualized sidling past the undergrad and taking the seat next to the Austrian. “Let’s make sure to involve cereal crops,” the Israeli brayed, “not just trees. It’ll look more applied.”

The bus stopped. It’s door opened at a shaded pullout. Daria spilled off the bus after the undergrad into an almost stagnant pool of slowly twirling people. But soon the flow became laminar, and she moved toward the trail alongside a few others. Stiff-leaved plants rose around her. Their showy flowers, on second inspection, were mostly bract and stipule, not petal, she realized:  rigid like waxen Halloween fangs. She compared them to flowers at home, soft as skin, evanescent as a mood. 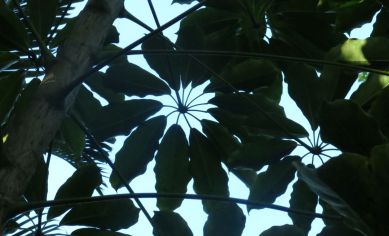 The farther in they went, the more the forest looked like a Rite-Aid gardening display that got away. Schefflera plants were five meters tall. Their remarkably rigid petioles would maximize support function. There were Heliconias and gingers with upright flowers or dangly ones. There were plants that should have been Hydrangeas but turned out to be monocots, and plants that should have been Pittosporums that the Austrian, who’d worked two years in Hawaii, and the principal from Aix-en-Provence, who’d spent a year in French Guyana, told everyone were Scaveolas.

The undergrad gasped, “Psilotum nudum.” The Austrian swung around to look at the “primitive plant,” an expression that popped into Daria’s head but irked her in advance:  the plant wasn’t primitive, but its had changed little for eons.

Daria stepped forward to touch the Psilotum. She wore trifocals, which was good in the lab, but not on a trail. She tripped on a Monstera that extended across her path. Her forward momentum broke the vine in two places, hurling her into a ti plant that then snapped. She somersaulted through the air, then stopped hard and loud on her bottom. A goose-egg rose on her forearm. Her knee was numb.

The Austrian put his hand under her elbow to pull her up. Daria slapped him, and stood.