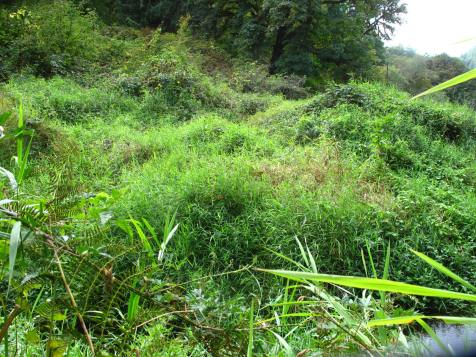 I like our little tractor, a lot, although I like what it does more than I like operating it. All the bits about pre-warming the coils and managing controls in the right order unnerve me. There are clutches, hand-levers, and foot pedals for going forward or backward, going fast or slow, lifting (or dropping) the bucket in the front, and tilting it, and then everything to do with the brush hog in the back. The brush hog is like a huge mower, with one rotating blade under a lid. It has its own little wheel on the back, but there are still controls for how fast it whirls, and to raise or lower it.

My problems with the tractor are mostly personal. While the brush hog is pureeing the weeds, it may be pureeing other things I don’t want to think about. While I’m advancing forward paying attention to the topography, I have the bucket raised so I can see the ground. Then the bucket will snag branches or nearby metal roofs as I churn past in ignorance. And if I run the brush hog over something it can’t bash through, a shear pin breaks, which after much mumbling, we manage to replace. While sitting on the tractor seat, I get antsy, too: I could be doing something more physical, and less mental.

What I like about the tractor is the rumble that vibrates through my body, with the occasional shake. It lulls me like a train ride or like a nap in a moored rowboat with the occasional large waves smacking the side. And I Iike that 5 mph breeze that makes the debris stuck to my arms flutter. I like floating over terrain that I know only from walking, a more labored and jerkier platform. But mostly what I like about the tractor is the clean track that the brush hog leaves behind.

Our little tractor is our big gun against weeds.

Our land is mostly forested, but a river runs through it. More correctly, a year-round creek, and a few year-round tributaries. Much of the valley and some of the terraces are open, which provides us with views and diverse flora, and provides wildlife habitat and corridors. Our game camera shows that we have cougars and black bears, elk and a few deer, bobcats, foxes, raccoons, coyotes, possums, brush rabbits, and aplondontias (boomers, mountain beavers). The meadows have shrews, mice, moles, and pocket gophers. (Our cabin has too many mice and bushy-tailed woodrats—see Us vs. Woodrats). The creek has beavers and otters, two types of salmon, trout, crawdads, mussels, and a bunch of other fish and fauna. The creeks need more shade and more close-in conifers which will some day fall into the creek, giving coarse wood that is so needed to keep the river and floodplain functioning in ways to which the native fauna is adapted.

In these open places, we manage the vegetation. Otherwise, parts of it become massive single-species jungles or they may have natural succession toward early woodland species that will eventually become forest cover again. This management includes some plantings, and also a lot of weed control (see also Weeds Happen, Part 1).

Our first line of defense against weeds is avoidance: trying to keep the seed from getting here in the first place. For that, we clean the soles of our shoes after we’ve been in a weedy spot somewhere, and we ask our guests, sheepishly, to do so, too. But we can’t control everyone’s tires and backpacks, or the winds. The large mammals are thought to carry one of the local bad invaders in their hooves and fur, and many seeds sit buried in the soil. An experiment at Michigan State showed that some of the weed seeds that were stored away in 1879 could still germinate 130 years later.

Our second line of defense is our hand-powered, quiet means: stomping, hacking, pulling, and selective cutting. 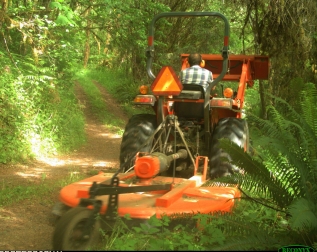 Here is a run-down on the weeds we worry about, and a few that we don’t.

Invasives against which we are most aggressive:

Invasives against which we are less aggressive:

Invasives that we watch:

Invasives we don’t worry about:

I would like to move on now to think about what I want to do when I’m done with the weed control: lie in the hammock, forage or garden, cook good food, read, write, check the game camera, soak in the wood-fired hot tub, sit back and chatter—or not—with my husband, do some sort of craft, pet the dogs.

So we grease the tractor, mow, pull, chop, scythe, and spray so that next year will be less bad than it otherwise would be, and so that perhaps the next year, and the year after that, we can lie in the hammock, cook, talk, pet the dogs, and feel good that wildlife (animals) and wild flora have a chance at keeping going in our neck of the woods in this big state in this big country on this limited Earth.

** Sward is a continuous stretch of that is mainly of one non-woody species (like a stand, which usually refers to trees or shrubs).

*** Rhizomes are underground stems, not roots, like what irises and bamboo—and a lot of weeds—have.

One thought on “Weeds Happen, Part 2”