Our weekend cabin is about a mile off the paved road. It has sunlight and wind, the music of two creeks, and a wood-fired hot-tub. It has indoor water and electric wiring.  But it’s off-grid.

“Dead Zones Are Real,” an internet site declares (1). “Those black holes of cellular coverage,” it says can often be worked around, especially if you have a good WiFi signal–which of course we don’t. We don’t even have a right-of-way to actually dig a fiber-optic and power line in if we wanted to. 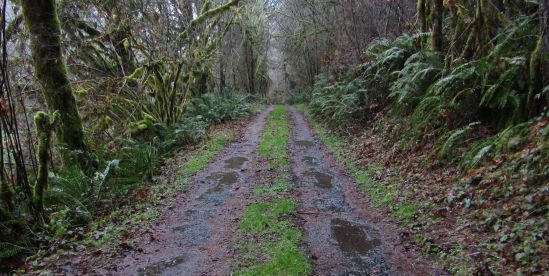 We arrive on Friday nights. We turn on the inverter, fill the dog’s water. My husband starts a fire, and I … set my phone in the one sweet spot (a calibrated distance from our signal booster) where it may get the tiniest bit of reception over the weekend—a spate of texts or e-mails, a notice from a news service, or a part of a phone call. And I check my phone before I go to bed, in the night, in the morning, and throughout the day.

It’s awkward.  It’s uncomfortable. It feels irresponsible: fast-paced society, politics, and events unfold without my knowledge; people’s health or happiness changes; simple puzzles go unresolved that I could have solved. It feels self-centered to turn my back.  And sometimes it feels unwise, like when we smelled smoke and didn’t know how far away, or in what direction, the fires were.  When we went to the cabin for a week last summer, I volunteered to drive half an hour to the nearest town “for ice,” but before I bought ice, I drove to the parking lot of the library, logged in, and caught up. Without phone, internet, and social media, I am on edge.

And yet, I remember times past–backpacking, long summers in the Arctic for fieldwork, months at a time in Guatemala in the Peace Corps in which it wasn’t safe to write home, or even talk on the phone, about what was happening after political events or after a fellow volunteer was kidnapped, murdered, or raped.

But I also think of times present, which started in 2011.

When 9/11 happened, my kids were nine and eleven (hmm, a fearful symmetry, to borrow a phrase). I’m sure it was a typical Tuesday morning. I probably had a long lecture to deliver. The morning would have been kids dressing, me making their lunches, their eating breakfast, and our running out to the bikes that I made them ride to school. My daughter, however, would flit from edge to edge of the bike path, like a butterfly on a fine afternoon. She would pedal three times then glide. She would sing to the breeze. “Fly like the wind,” I’d urge, and look—not at a cell phone, but at my watch. “Hurry up,” my son would intone with increasing urgency. He wouldn’t have left us, even though he detested being late. The counselor met us at the school door. With waving arms and eyes focusing on a succession of spots, she said not to worry: the teachers were already assembling the kids, things would be explained to them, and they would be listened to.  I had no idea what had happened on the East Coast three hours prior.

I felt guilty: I was so involved with my family and job that I paid no attention to the world beyond. In fact, I was so busy that I never got the time that fall to see footage the 9-11 tragedy, and I still have only seen part of it, once.

My reaction was irrational, but it triggered a new burden: that I must know what is happening. Because stuff happens.

In 2007 when my husband and I got Summer Creek, I didn’t understand that I would be ceding the grid’s access to me every weekend of the year. Nor did I know that my parents would move to our area, and would have illnesses and end-of-life experiences that I would want to be part of. The cabin had a phone line when we arrived, 0.8 miles of wire that lay on top of decaying branches, spanned culverts, and was already becoming overlain by soil, thatches of grass, and mats of berry canes.  We had phone service long enough for me to buy and use a phone card for a few long-distance calls.  Then the phone stopped working. It was a private line, but the phone cooperative came out to find the break, to make a splice. It happened again. They suggested replacing the line (on the ground again—if we’d strung it between trees, it wouldn’t have lasted a season), or better yet, buy a right-of-way and bury a line, complete with power.

We looked into satellite phones—extravagantly expensive, and only reliable when satellites were in the part of the sky that showed. WE thought about a fiber optic cable and power, and decided against it, for two reasons—one family shouldn’t need that both at home and away, and we didn’t want to spoil the cabin. I would have changed it too much.

We ordered another reel of line ($1400) and laid it ourselves. We marked it every five paces with a bamboo stake and an orange flag. A contractor connected it on the two ends.  A few months later, it stopped working. A branch? Elk? Water? It didn’t matter. We know that it wasn’t going to work.

Three winters ago, before leaves came out, we didn’t get around to removing the dead line. Or two winters ago, or last winter. But last weekend, we finally did.  We have no more pretense of on-demand phone: it’s the end of the line.

We removed the hint of a possibility of a permanent connection. Voluntarily. 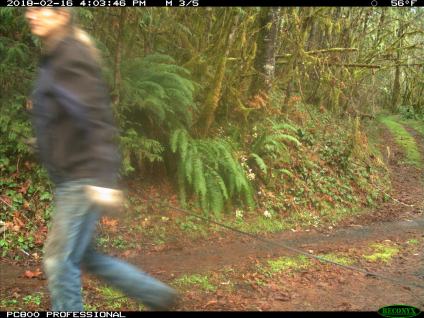 The process was therapeutic:  wait three or four years until you no longer notice the orange flags and then you notice them again; wait until a previously un-revealed crocus blooms where you cleared and then dies more permanently. Cut in the line in two places, pull, coil.  Pull, grovel, wrap it around your arm, your waist, lean, and pull. Fall face first. Find nettles. Find rocks with your shins. A day later, find many speckles on your legs from the berries that pierced your blue jeans.  But when all the wire is amassed, stand back and feel good.

Feel just a bit disempowered. Know that you won’t be putting a phone back in, that you don’t want it. Know that you want to manage your own thoughts and interact with each other. Know that you have chosen to believe that the news of bombings and sicknesses and greetings can wait.

But also know this:  you are taking back control.

When I arrive on Friday this week, I will surely rush to set my cell phone in the sweet spot, but I will know, resolutely, that we chose to spend our weekends at the cabin, at the end of the line.

(2) This is one of the 85 photos the game camera got of us pulling line.