We were cutting down 60- and 70-year-old alder, Douglas-fir, bigleaf maple and a few hemlocks and western redcedars, and as we did that, we’d be killing a lot of whatever else lived there in the forest–ferns, lilies, meadow rue, baneberry, and non-green things that couldn’t fly or crawl away. Who was I to say, “Off with their heads,” like a crazy queen in Alice-in-Wonderland? I’m the legal owner, but legality sounds like the wrong yardstick to me.

I’ve worked in forestry and forest products at the university for almost three decades; my husband has worked in it longer. We planned this logging for two reasons: to  further our ecosystem restoration goals, and to produce lumber. We knew that if people have to be consumers of material, using Oregon-grown, renewable wood from well-managed land has a lower environmental cost than just about any other material–steel, plastic, bamboo, concrete. We had the capacity to log some of the land, and we felt we probably should do it. Log it well, then re-hab it.

And so when we decided to log, I had to own that decision. Which was hard.

And I knew that for me, I had to be there. I had to be physically present when the stream was messed with, the roads pushed through, the trees cut down.

But I wasn’t in control anymore.

And I never was. The vision was a shared one, with my husband, not my vision alone. We were on the same page, but not always the same paragraph. (Just think how hard it is to buy a couch with another people, then multiply a lot more decisions.) We shared our ideas with our consulting forester, who had his own experience and ideas, knew the laws, and knew what was feasible. He then communicated with the logger, who like the rest of us, had his experience and ideas. The logger then shared his understanding of our forester’s understanding of what we wanted. with the people who worked for him.

Let me explain what we had. A) A 20-acre hillside next to a salmon-bearing stream, covered in slowly-dying 60-70-year-old alders. Around them was salmonberry, a fifteen-foot tall brushy plant with deciduous thorns. This community came in after logging. The more normal would have been dominated by conifers (Douglas-fir, hemlock, and western redcedar). The conifers are important to providing the temperature and gravel conditions that make it possible for the juvenile salmon to do well in the streams.* B) Two three-acre patches on the facing hill, which were almost pure conifer. A natural disturbance (rather than a plantation) would have had more hardwoods mixed in. So we wanted to “re-initiate” the stands to have more conifers in the first stand and fewer conifers in the second two patches.

My husband and I were most concerned with the creation of diverse habitats, shade, and a deep boundary layer around the stream, and on avoiding infestations by aggressive weeds. I would guess the forester was most concerned with getting us good financial returns and leaving us with a nice piece of property with proper drainage that was ready for re-planting. I imagine the logger was thinking about how to use his people and equipment efficiently to get a good check and not break laws or our contract.

Getting where we wanted would be complicated. Besides these natural biases that all of us had, we learned that lots of our desirable outcomes weren’t feasible. We actually need to pile some of the slash up (rather than leave it strewn around) to get a new stand established. That’s because the slash would have covered the ground surface, hosted seedling-eating and seedling-girdling rodents, and tripped up the people who did the vegetation control. Yep, vegetation control, meaning herbicides. Without herbicides, in this countryside, we would end up where we started–with salmonberry that suppressed the trees, and some alder and maple that broke through. We actually need to have much wider roads than I expected. That’s because to support that equipment, and then to decrease the chance of erosion and landslides later, we needed the roads to be cuts, not cuts and fills. That is, we needed a triangular chunk of earth removed that was wide enough to drive on. We couldn’t cut a little triangle and use some of it for fill.

And there are plenty of laws. For example, the allowed hours of running equipment would be cut back if fire danger rose (called partial hoot owl), and we had to be prepared for a shut-down altogether if it became too dry (hoot owl). The state had to be informed of our detailed plans, then they needed to tell us what restrictions we had related to endangered or threatened species. Because the threatened coho salmon spawn in our creek, we are only permitted to make a temporary stream crossing for a particular eight weeks. Once alder is felled, it has to get to the mill in two weeks, according to the contracts, because it begins to stain. So if we had to stop logging for any reason (weather, equipment, personnel) and that date for pulling the stream crossing came, that would be the end of everything–the logging, the sale of the logs that were on the wrong side of the crossing, and even the site preparation for re-planting.

It’s risky business, letting weather and someone else determine how good your forest looks after it is cut down. 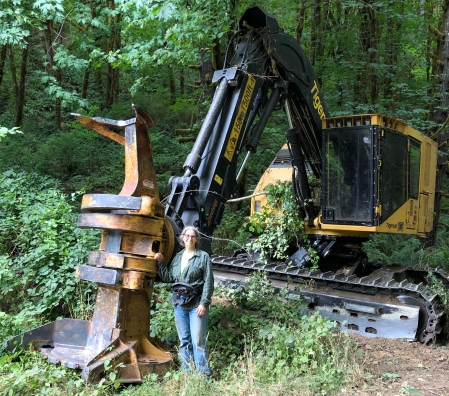 We waited. The first week the logger was expected, he didn’t show up, but the forester brought in culverts and gravel. The second week a little equipment dribbled in–a harvester, a cat. The logging weather was perfect, and the clock was ticking. Next, a shovel arrived, and a water tank on wheels. Then a small trailer attached to a pick-up. That would be where one of the loggers would stay to watch for fire for a few hours after operations.  But there was still no equipment doing anything–making the temporary crossing, making the roads, then logging.

The delays gave me even more opportunity to second-guess our decision. Log prices were unspectacular. The views of the hillsides were nice just as they were.

I had to go to a several-day conference, and that is when the logging finally began. I couldn’t be there to own it, after all.

I traipsed from session to session, meal to coffee break to conference room, and finally to bed for and three and a half days. I was unsettled.  I tried to picture the creek, the hillside succumbing to heavy equipment, those poor trees falling to the ground and splintering on impact. We have no cell service at the property, so I knew I had to wait until I was back to learn what my husband had seen

They would have installed that temporary crossing –a layer of gravel, then the geo-fabric, then the parallel culverts to carry the flow, covered over with gravel. They would have cutting the roads, preceded by knocking over alders in the road’s path. And then the harvester would have come in, that colossal machine that holds the bases of trees, saws them, and lays them down. Then the processor would have lifted the trunks to de-branch and trim them to a precise length specified by species and diameter. The shovel would sort and pile them, and later, pile the slash leave the site ready for planting.

I’d climbed those hillsides, my feet pedaling in the crumbly soil, my body suspended by my fist-holds on the ferns. Why did we want to ruin everything, that peace, that green?

But I knew we’d reasoned it out, more than once, over a long period. Many years.

The conference ended. I drove to the property after a quick stop at home for clothes and groceries. I saw the havoc my husband and I had invited in.  And that was when I finally owned it.

The smell of crushed leaves, and of resin from the few conifers.

The majesty of the falling trees.

New access to the neighboring old-growth forest that sat, less than a quarter of a mile away. It used to take an hour to climb to it. It took a half-hour to fall back down out of it. We’d come home scratched, bruised, and studded with those deciduous prickles that would work their way out of our skin for the next month. And any trail we had tried to make would knit over in a few weeks.

And for once, we were on the production side of consumption.

The righteousness, because we’d reasoned this out. We’d re-initiate the forests. The land was getting closer to our ultimate goal–healthy streams, diverse forest that can host diverse organisms–closer than it was before we had the unnaturally unbalanced forests cut down. We would reforest well.

It was noisy. There were strangers–men, who according to the graffiti on their rigs, had different values than I did. Earth was moved in places I thought would be untouched. A few too many trees came down in some spots, and some of the trees that were supposed to be left in buffers or in the islands of conifers at the first site, got scarred up. But it’s a messy business. And I’m not in control. Never was, exactly.

And I didn’t mind. We’re doing it, I thought, and I felt good about it.

Not what I’d expected to feel.

After these unexpected emotions, I wanted to thank the systems that let us facilitate this. Strange, the journey the mind takes.

Thanks, log-truck drivers, loggers, gravel guys, and forester–that was what I wanted to say. Thanks, husband. Thanks forest on the edges that’s still there forest in the cuts that is becoming converted, and forest that will grow up for the next century in its place. Thanks salmon for giving us the idea. Thanks state and federal programs and people behind them that gave us advice. (I think your programs need a bit of tweaking though. I hope I can help get a few changes.) Thanks geology, Earth, sun, and water for this productive place. Thanks research and education for providing best guesses on how to go forward.

Thanks, world, for letting me be a steward, not because I’m a legal owner, but because I think what we are doing–in moderation–is a good thing.

“Yeah,” I’m telling people. “We did a logging this summer.”

Resource and consumption decisions are difficult. So many personal values go into them. Thanks, neighbor, fellow human, for reading about this part of my journey.

*The conifers growing withing 75′ of the creek help the water temperatures stay low two ways–by shading and holding a boundary layer of air hear the creek, and eventually by falling into the creek. The conifers decay much more slowly than the hardwoods once they die.  Logs in the creek help by making pools and gravel bars, keeping the streambed from scouring down to bedrock, and letting the streams build up higher rather than become incised. Once they are higher, the water “engages” with better with the stream bank. More water is stored in the soils, and it can dribble out throughout the summer, providing cooler water when the flows are low and air temperatures are high. We are monitoring stream temperatures in eight locations every year, and are expecting that the separate riparian restoration project we are doing, will cause the summer water temperatures to drop.

4 thoughts on “Logging our Land: My Mental Journey”